Quantification of human immunodeficiency virus type-1 (HIV-1) proviral DNA is increasingly used to measure the HIV-1 cellular reservoirs, a helpful marker to evaluate the efficacy of antiretroviral therapeutic regimens in HIV-1infected individuals. Furthermore, the proviral DNA load represents a specific marker for the early diagnosis of perinatal HIV-1 infection and might be predictive of HIV-1 disease progression independently of plasma HIV-1 RNA levels and CD4+ T-cell counts. The high degree of genetic variability of HIV-1 poses a serious challenge for the design of a universal quantitative assay capable of detecting all the genetic subtypes within the main (M) HIV-1 group with similar efficiency. Here, we developed a highly sensitive real-time PCR protocol that allows for the correct quantification of virtually all group-M HIV-1 strains with a higher degree of accuracy compared with other methods. The study involves the detection of HIV proviral DNA from blood sample of treated patients and their current status of Plasma RNA load and CD4+ count for correlation.

The HIV-1 proviral DNA load could be an alternative viral marker, as it is known that proviral DNA persists in infected cells, even after prolonged successful HAART as evidenced by undetectable plasma RNA viral load. A decline in DNA might indicate a long-term impact of the HAART on the reservoirs and the long-term effectiveness of the treatment. But data regarding the decline in DNA are sometimes conflicting. Some authors noted decreased levels after one year of antiretroviral triple combination therapy and others reported stable HIV-1 DNA levels over several years in ART naive patients.

The quantification of HIV type 1 proviral DNA in peripheral blood mononuclear cells (PBMC) have previously been reported, and many of them are based either on the principle of conventional PCR requiring post PCR analysis or on real-time PCR on total PBMC, using specific probe detection.

Real-time PCR is becoming increasingly popular as a method for the quantitative detection of DNA and RNA viruses. Besides its research applications, an accurate determination of the viral load, whether cell associated or free in biological fluids, can provide critical information in the clinical setting for the diagnosis and staging of acute and chronic viral infections, as well as for guiding treatment interventions and assessing their efficacy. In addition, real-time PCR has been applied for screening purposes to measure the level of contaminating viruses in blood donations or plasma pools for the production of blood derivatives.

The circulating strains of human immunodeficiency virus type 1 (HIV-1) have been classified into 3 major phylogenetic groups, termed M, N, and O, all of which cause HIV/AIDS in infected individuals. GroupM (for “major”) comprises the great majority of HIV-1 infection worldwide and has been further subdivided into 12 distinct lineages, termed subtypes (AD, FH, and J), and circulating recombinant forms (AB, AE, AG, and AGI). Group O (for “outlier”) comprises many fewer isolates that are geographically restricted to west central Africa. Finally, group N (for “non-M/non-O”) was discovered recently and is the least widespread of all HIV-1 lineages. Viruses belonging to this group have thus far only been identified in a handful of individuals, all of whom were residents of Cameroon. Sequence variation among members of these various lineages is extensive, with nucleotide sequence variation in the env gene with a range of 18% among the different group M subtypes and circulating recombinant forms (CRFs) to nearly 42% among members of all 3 groups. Given this extent of diversity, it is not surprising that the great majority of nucleic acidbased diagnostic tests originally designed for group M, subtype B viruses have reduced sensitivities in detecting viruses from other groups and subtypes.

Quantification of the HIV-1 proviral DNA is increasingly used in the clinical follow-up of HIV-1infected individuals. However, due to the high degree of genetic variability of HIV-1, the identification of a PCR amplicon that guarantees the same efficiency of amplification with all the genetic subtypes of the main (M) HIV-1 group represents a major challenge to the design of a universal assay. We have developed an HIV-1 group M-specific quantitative realtime PCR assay that measures the HIV-1 proviral DNA load with a similar degree of sensitivity and accuracy regardless of the viral genetic subtype. The success of this protocol for the quantification of HIV-1 proviral DNA relies on the optimized design of primers and probe, which ensures the correct quantification of virtually all circulating group-M HIV-1 strains. Moreover, this assay is so robust that it can quantify DNA derived from a crude lysate with the same degree of accuracy as with purified DNA. As a starting point, we selected a region spanning parts of the HIV-1 LTR, which is highly conserved among all circulating group-M HIV-1 subtypes. The selected region is completely conserved in about 96% of the HIV-1 sequences present in the NCBI database. A realtime PCR assay was developed by designing two specific primers, and a probe within the selected LTR region.

We evaluated the accuracy and sensitivity of the HIV-1 of different genetic subtypes, some of which were carrying mutations in either the primers or the probe sequences. The modified assay was able to accurately measure proviral DNA from all the primary HIV-1 isolates tested with similar efficiency regardless of genetic subtype as well as from clinical samples derived from HIV-1-infected patients. The assay involves quantification in PBMC of HIV-1 seropositive patients. As 95 to 99% of infected cells are CD4+ cells, we developed a relative quantification assay of HIV-1 proviral DNA in purified CD4+ cells. Here, we have developed a multiplex real-time PCR for quantification of HIV-1 LTR DNA and the CCR5 gene in CD4+ cells using TaqMan probes. Sequence-specific hybridisation probes provide the most specific real-time analysis of amplified target sequences.

CD4+ cells were isolated from 10 ml of patient EDTA whole blood samples by an immunomagnetic method using anti-CD4 coated magnetic beads (Dynabeads® CD4 Positive Isolation Kit) according to the manufacturer's protocol and were stored at -80°C until use. The complete process takes approximately 3 hours and the purity of the CD4+ cell preparation was about 99% as estimated by Becton Dickinson Fascan Flow Cytometer technology.

DNA was extracted from purified patient CD4+ cells diluted in 200 µl PBS, using the Sigma Aldrich, GeneElute, (Cat. no. NA2020), according to the manufacturer's protocol. Particular attention was paid on DNAse and RNAse free materials. Depending on the number of samples, the whole DNA purification process required approximately 1 hour.

A series of dilutions of HIV-1 DNA standard corresponding to 106 to 100 was included in each experiment in order to generate an external standard curve. The PCR mixture (total volume 20 μl) in nuclease free water contained MyTaq™ HS DNA Polymerase, final concentrations of 3mM MgCl2 and 0.5μM of each primer and 5μl of purified DNA or negative control. All samples were analysed in duplicate. The amplification protocol for HIV-1 on the CFX96™ (IVD) BIORAD was as follows: a 5 min denaturation step at 95°C for polymerase activation, of 45 cycles consisting of 15 seconds at 92°C, 1 minute at 65°C. The fluorescence was measured at the end of each elongation step. A fragment from the CCR5 gene was amplified in parallel with the HIV-1 LTR gene to quantify the total number of investigated cellular purified DNA of CD4+ cells.

The study based on the selected patient those who have undergone treatment with the Anti-HIV treatment of HOOIMM plus. Here, we have reported the status of Qualitative proviral DNA, Quantitative HIV-1 RNA RT-PCR, Western blot Assay, qualitative antibody assays for all the five treated HIV patients. Nevertheless, CD4 cells enumeration at present.

It has been found that after the treatment, all the four patients were HIV asymptomatic seropositive, since their report showing positive with HIV COMB (Followed the Manufacture's protocol) (Table 1.1). Plasma viral load were detectable for all treated patient. The table 1.2: show different western blot band profile in the serum (Detection Genelab HIV Blot 2.2 USFDA) confirming the HIV Antibodies and HIV type. The blood samples were reported HIV-1 type for all individual. Table 1.1, Figure1, 1.2 and Table 1.3: shows proviral DNA not detected for all five treated patient. 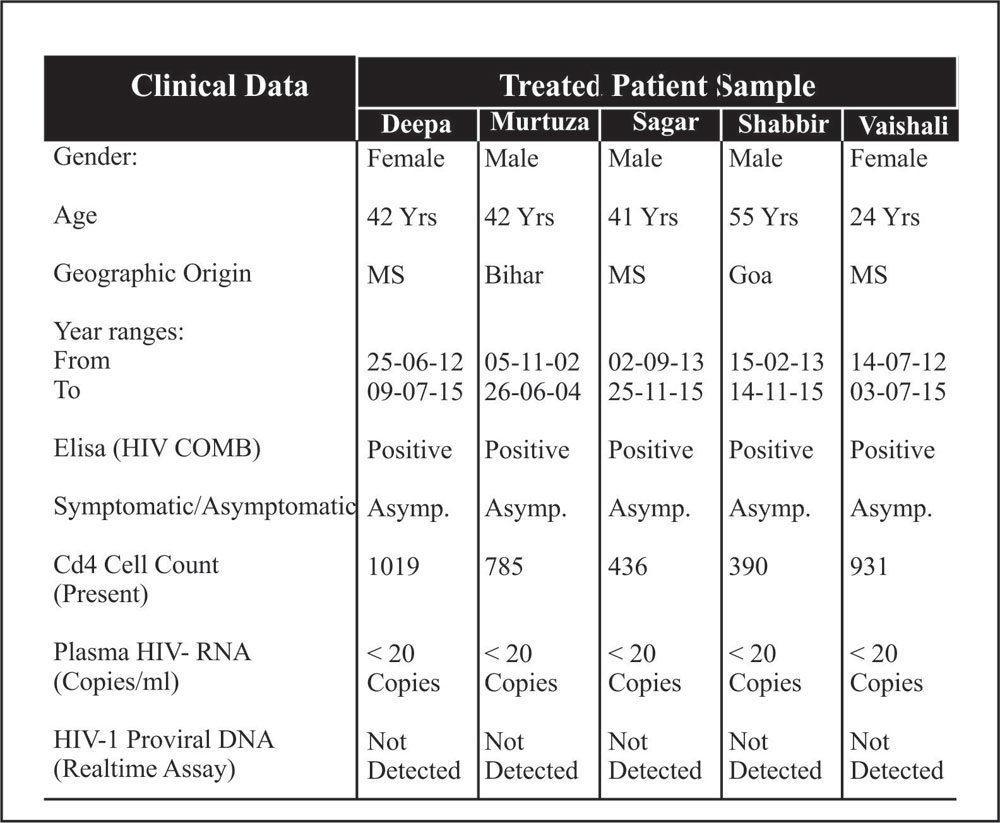 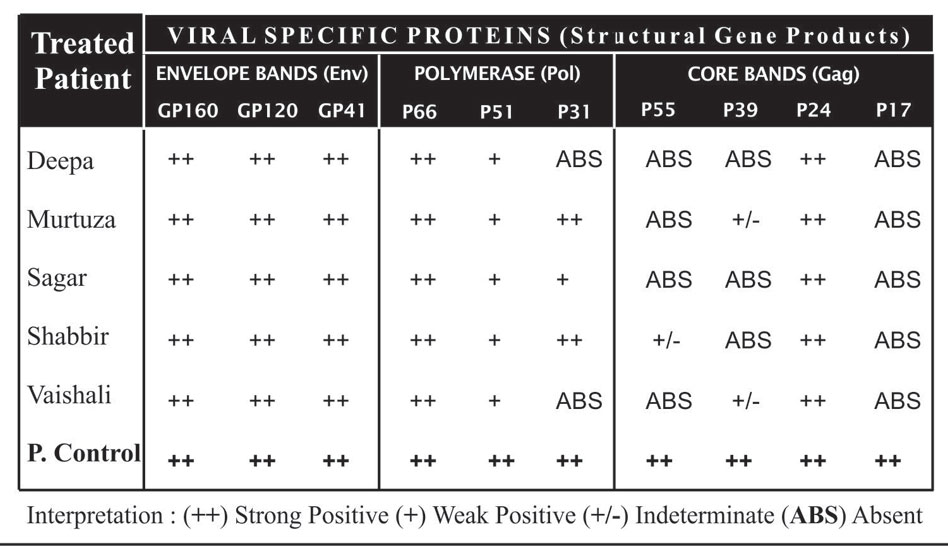 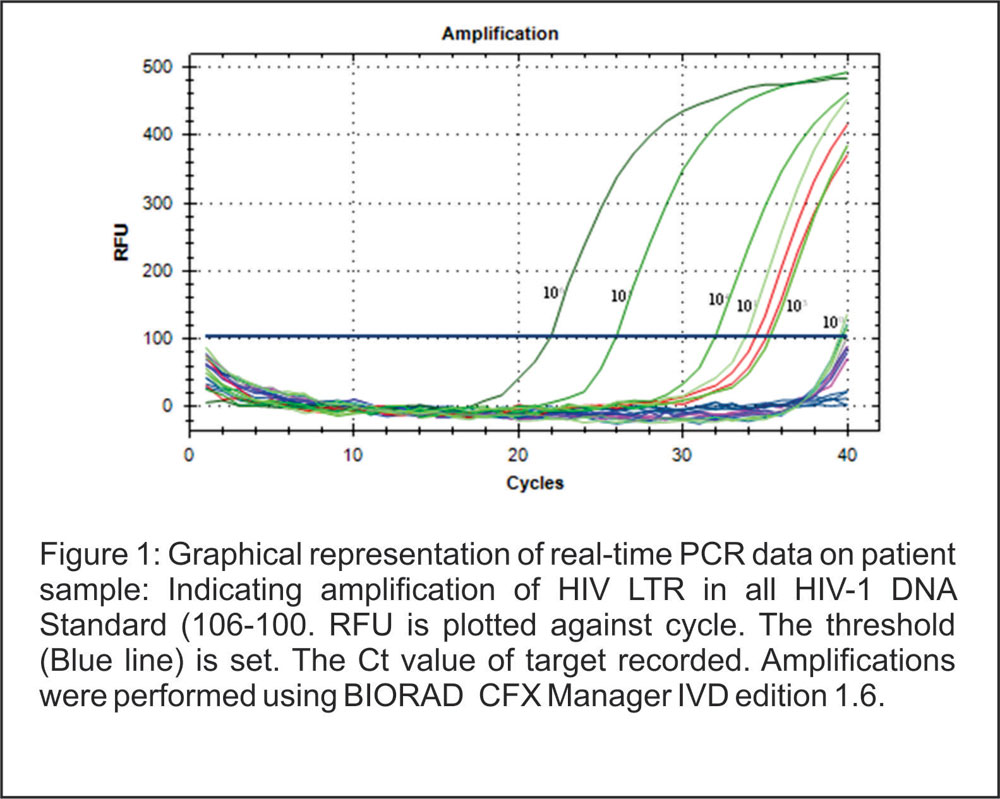 Variation of Ct with PCR efficiency. The blue standard curve has an efficiency of 113% (the slope is 3.029). 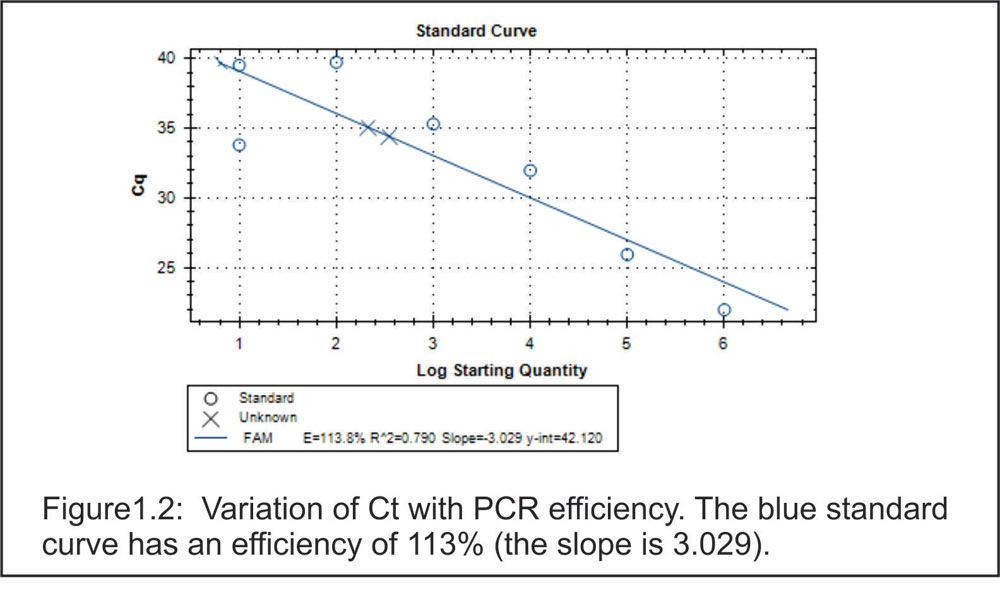 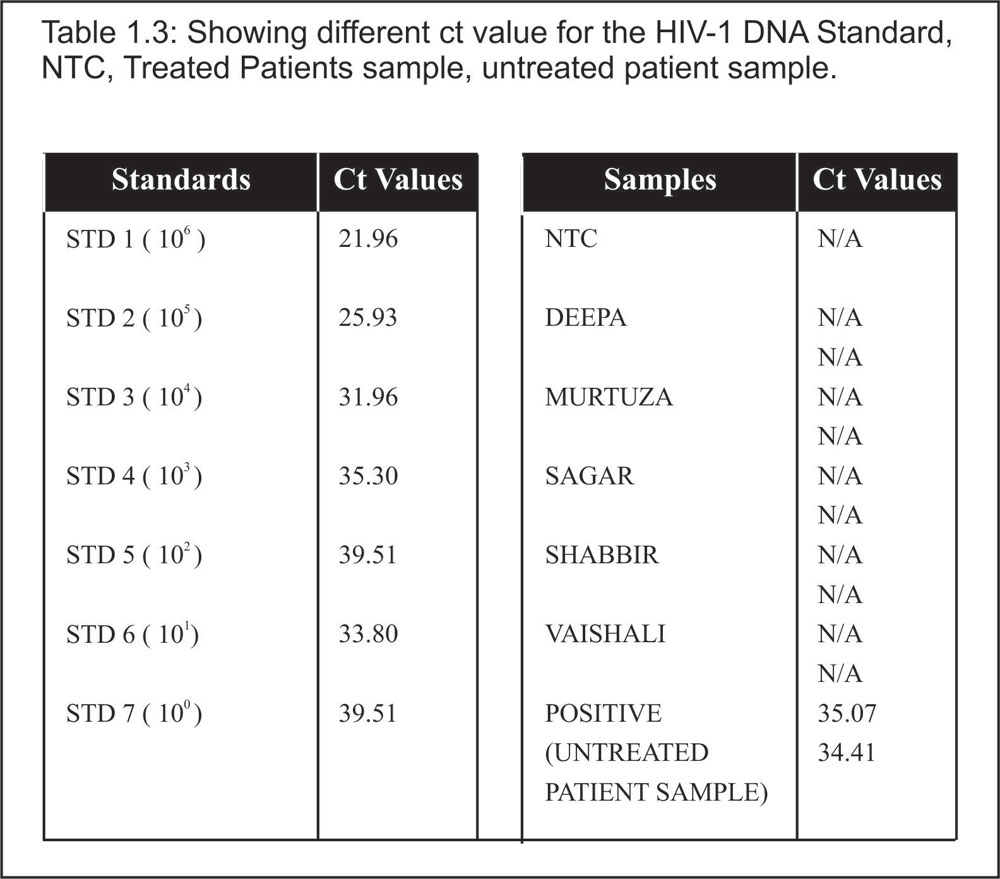 In invitro lab studies, this drug was put for Drug Sensitivity Test and Anti-retroviral Activity Test in the laboratory adhering to the standard protocol and the highest inhibition rate of 98% was recorded against the causative agent, HIV virus. The detail procedures undertaken in an invitro lab study are mentioned as under: -

2. Mix it properly and keep at room temperature

3. Overlay this blood sample on 2 ml Histopaque solution in 25-ml sterile centrifuge tube. Centrifuge the tube at 1500 rpm for 20 min

4. Two layers will be formed after centrifugation

5. Separate out the upper layer of Histopaque with the help of sterile pipette and collect the lymphocyte ring in 2 ml sterile eppendorf tube

6. Microfuge it for 1min at the bottom of the eppendorf tube lymphocytes sediment will be observed.

8. Prepare the serial dilutions of the drug of our interest or to be tested in the range of 1ug/ml – 500 ug/ml

9. Add 500 ul of the lymphocyte culture with the help of sterile pipette / tips and add the appropriate dilution of the drug to the respective culture well along with control without addition of any drug.

11. After incubation do the P-24 ELISA test for Control and for Test

12. Interpret the results on the basis of difference in between the Control O.D and Test O.D and calculate the % Inhibition of the viral growth in test in comparison with Control.

13. Example: - O.D of the Control always ranges from 0.2-0.4 while the O.D of Test ranges in between 0.06-0.1 which indicates the inhibition of the virus multiplication.

This Test is having lots of significance over the other available tests in the Market as it gives the results within 24 Hrs very effective and economic too but requires skills of overlaying of the blood, preparation of Media, handling of the highly infectious viral lysates, result interpretation etc. Basic principle of the Test: We are giving the identical conditions for the growth of Virus in control as well as in Test. As we are treating the Test sample with the drug and after incubation the P-24 ELISA give us core protein formation during incubation comparison with control.

Significance of the Test:

Leading manufacturers of the ARV drugs in India designs the drug dosages after getting confirmation of this Test. It also plays key role in the optimization of the dosages for the patients.

Safety studies of the treatment are: